The steps illustrated remain the same.   The only difference is, the Android Studio 2.3 zip  file (without sdk and installer) can be located here.    If 2.23 was previously installed, migrate the 2.2.3 settings on first run of Android Studio 2.3.   This will copy across the shared SDK location with the Xamarin installation.

You may need to run Android Studio and Xamarin side by side from time to time.   This may be needed if you are an Android developer experimenting with Xamarin or maybe you are migrating an Android application to Xamarin.   I run the two side by side often especially when I am binding native libraries for Xamarin.        I put together a guide to make the new Xamarin Cycle 9 release and Android Studio 2.2.3 run together without any pain and also without wasting disk space with multiple copies of Android Sdks.    I also find it’s much cleaner to install everything manually without the installers.     This guide is specifically aimed for Windows and Visual Studio 2015+ users.

Install Java JDK 1.8  x64  (Use the latest update of this available)http://www.oracle.com/technetwork/java/javase/downloads/jdk8-downloads-2133151.html

The NDK is a zip file.  Extract this to a location that’s easily accessible:   C:\AndroidSDK\android-ndk-r13b-windows-x86_64

This is just a zip file not requiring any installation.  Extract the contents to a location that’s easily accessible.  Eg.  C:\AndroidSDK\tools_r25.2.3-windows

From command line execute <Android SDK>\tools\android  This will open the SDK manager. Install API 25 SDK Platform   (and whichever other APIs you require)

Install “Sources for Android SDK” for API 25.    Xamarin does not require this, but Android Studio will later request it be installed.    This will simplify the later setup if done now. 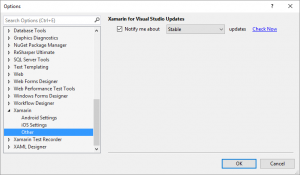 Install Xamarin for Visual Studio 4.3.   If you installed Xamarin with Visual Studio 2015, you have it already.    To upgrade to Cycle 9 use the Updater Channel within Visual Studio.      Alternatively if you don’t have it, you can manually install it:  https://store.xamarin.com/account/my/subscription/downloads.   Download the individual installation package per platform (and not the universal installer).  At the time of writing this there isn’t a direct link to cycle 9, so download cycle 8 and update it. 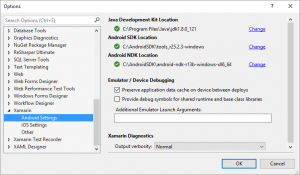 Set up the SDK paths within Visual Studio.   There is a setting for both the path to the NDK and SDK previously installed.  The location of the Java SDK should be set here too.    Visual Studio will need to be restarted for this to take effect.

Note:   If Xamarin was previously installed via the Visual Studio or the Xamarin Universal Installer.  There will be another Android SDK installed.    This is most likely:   C:\Users\<user>\AppData\Local\Xamarin\Universal\AndroidSDK.     If the steps above were followed, this previous path can be safely removed.       This folder can be used to share the SDK with Android Studio, however personally I don’t think it’s a great location for doing that.

The Xamarin Cycle 9 installation is complete and should now work with the new SDK location.

On first run, Android studio will start the wizard to set itself up (and download the SDK).   Skip the wizard. Choose “Settings” from the Start screen. Everything needed should already be in place, so Android Studio will accept the SDK without any problems. 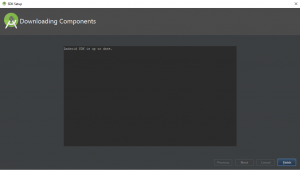