There has been some nice progress on the pure c# library for the EV3 Lego Mindstorm Brick from Lego and the BrickPi3 from Dexter Industries.  The BrickPi is great as it adds loads of extra processing power and more importantly memory for the EV3 kit using a Raspberry Pi.

The library is for both Xamarin.IoT and Android Things.    As soon as it’s ready I’ll post the source to GitHub.   If there is interest, I can also spend some time and port the Android Things implementation to Java or Kotlin for Android Studio.

The ultimate plan is to use this in a Lego based robot as a play project, but the experimentation will form basis of an actual larger artificial intelligence project.      It will also be hooked up to Azure IoT for the telemetry. Always fun to fly to Johannesburg and speak at GXUGSA.    I hope it was useful. Last night was a fun evening of Azure Iot at the Azure Cape Town user group.   Thanks to all for coming, I hope it was useful.   The turnout was awesome! There’s a lot of fun to be had here!   Xamarin Iot deploying to a Lego Mindstorm EV3 from Visual Studio, isn’t that awesome?

I’m now off to make it do something more useful.  I will write a full blog post about it afterwards, including instructions how to set this up yourself.

Have a great day! This is a first look at the new Xamarin Iot functionality found within Visual Studio for Mac 7.1 Preview.   I will dig much further into detail in future posts, but lets have a very quick look and it.    I’m really excited about this addition to the already awesome Xamarin tooling!

A new project type has been added for Iot.    This project type or template will create the solution and project needed to run on the Iot device.

The Iot Device Manager allows all the connected devices to be managed.   This setup is very similar to the Mac Agent used for iOS development with the Xamarin Visual Studio for Windows extension, however it will display all the Linux based devices running on the network.  In this case and screenshot it’s a Raspberry Pi Zero running Raspian (Jesse).   Configuring the device will allow remote deploys to the device from your Mac.    This will require a user name and password of a user on the Raspberry Pi.  This user will be used to connect to the Raspberry pi via SSH.    Also note, SSH needs to be enabled on the Raspberry Pi for this to work.

Now you can start developing your Iot solution.   What’s really awesome is, all the things you expect to work will just work. This includes break points and a full debugging experience.     All this can happen wirelessly to a “headless” device.

The build and execution process is very similar to the Mac Agent when you do iOS development from Windows (Visual Studio) to a Mac.  The difference in this case, it is from a Mac (Visual Studio) to a Linux instance (Raspberry Pi).   On the very first execution, the mono run time will be copied over to the device.  This will be used to execute the built app.    The application itself and it’s “built code” is also synchronized with the Raspberry Pi.    This compiled Iot app is then in turn executed on the device remotely.

Lets see it in action!    Here is a simple example of the now standard Iot demo of a flashing LED, but running on a tiny Raspberry Pi Zero W.    What’s really nice about this implementation is, it runs on devices that is not supported by other Iot platforms, like Android Things and Windows 10 Iot Core.   It will run on the myriad of Linux based devices out there.

There is much more to show and tell.  So there’s much more blogs to come on this topic!   This will also include how Android Things and Xamarin Iot can work together to make cross platform Iot simpler.

But for now:  Happy Xamarin Iot’ing! 🙂

What’s really great about having Arduino support within Visual Studio is, you can group together all the various different projects that makes up your solution all together within a Visual Studio Solution.

In a world of Iot and cross platform (or multi platform) development this is perfect.   You could have one or more Arduino projects, .NET Micro framework projects,  a Xamarin Mobile client and the back-end (be it an on-premise ASP .NET WEB API solution, or in the cloud with something like Azure Mobile Services) all managed together in a single Visual Studio solution.

Visual Micro can be downloaded here:   http://www.visualmicro.com/page/Arduino-Visual-Studio-Downloads.aspx   It is a Visual Studio extension which will be installed within Visual Studio.   There is a version for both Visual Studio 2015 and 2017 RC.     Be sure to have the standard Arduino IDE installed as well, as it uses this tooling under the hood.   Arduino version 1.06 – 1.8 is supported.

Both a toolbar and a new menu is added to Visual Studio.    The toolbar allows access to quickly configure the connected board and COM port used (via USB).    It also allows quick access for building and debugging, however if the Arduino project is the startup project the debugging and build options work as usual direct from the Visual Studio hotkeys, toolbars and menu items.    The menu allows for deeper configuration of the compiler, debugging options and other integration options.

Templates are provided to easily create a new Arduino Sketch or Library.    Standard Arduino INO files are supported.   These standard file types are also used when opening and saving to existing Arduino Sketch files, which ofcourse can be ported back to the Arduino IDE if need be.

The solution explorer is quite neat for the Arduino.   All the source files, header files and external dependencies are presented in much the way you have grown accustomed to in Visual Studio. 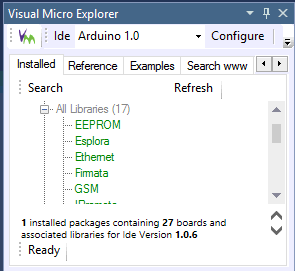 The Visual Micro Explorer provides a visualization of all libraries installed.    There is also reference material and documentation provided along with a collection of Example code.   This is great for both learning and quickly looking up something.

Debugging and conditional breakpoints are supported.   This does though require a purchase of the Pro version.   The pro version has quite a number of additional features aswell which you can read about here:  http://www.visualmicro.com/page/What-features-are-included-in-Visual-Micro-Pro.aspx

The live tracing works great.  There is also the standard port monitor which does live logging of the Com ports.    In the screenshot provided the codes displayed are being reported from an infrared remote control in real-time.   The ability to see everything happen, and be visible, at once in an IDE saves a whole load of time.

I’ve been using Visual Micro for a few Arduino related Iot projects and can definitely recommend using it.